There wasn’t really enough time to bird this trip, however, I was able to catch a glimpse of a few birds we have back home in Arkansas.

My aunt and I spent less than 24 hours in Fargo, N.D. (with the slight detour into Minnesota). It was my aunt’s 49th state to travel to and we spent the last day she was 49-years-old in the state. We had just enough time to accomplish all we wanted to.

Fargo is a great town and I actually have family who live there. It was fabulous to be able to have lunch with my grandpa’s sister and her daughter. I was even able to catch part of a holiday concert with Majorie Schlossman and Margie Bailey at the Plains Art Museum before walking to downtown to dine at Toscana, which has fabulous Tiramasu and tortellini pasta.

It was only during lunch that we remembered that Fargo was home to Federal District Judge Ronald Davies, who presided over the 1957 integration of Central High School in Little Rock. He was assigned after Arkansas’ judge asked to be relieved. My aunt now works as an interpreter for the school, which is now a national historic site. It was during a discussion of Central High that we learned that Fargo has recently named their newly built high school after Judge Davies. We had to go see it.

The other main item(s) of interest involved the Celebrity Walk of Fame where we also found the above painted buffalo. Pretty cute! It was neat to see who all the city had sign — it included government officials, children’s performers, athletes, actors, authors, sports announcers, musicians and sports legends. Here’s some of the ones I found interesting:

The Celebrity Walk of Fame is at the Fargo-Moorhead Convention and Visitors Bureau so we were also able to catch a glimpse (OK and a picture with) the famous wood chipper from the movie “Fargo.” They even had a copy of the movie for purchase since we have never watched it.

In a nutshell, Fargo, population 105,549, is a great city. However, I will always think of the Fargo as the 98ish-member community in between Stuttgart and my hometown of Wynne.

“So it will go, the dream will move from dream to reality to memories.”
– Robert Asp

Our first stop Wednesday was to see how one man’s dream translated into a reality and inspiration for others.

We traveled to Moorhead, Minn., to the Hjemkomst Historical Heritage Center to view Robert Asp’s ship, Hjemkomst (Norwegian for Homecoming).

Asp, a Fargo teacher, dreamed of building a Viking ship and sailing it back to the home of his Norwegian forefathers. It became a reality in 1972 when he began building the ship in a former potato warehouse in Hawley, Minn.

However, Asp was soon diagnosed with leukemia and was unable to complete his dream. He died in December 1980 just months after sailing his completed ship on Lake Superior for its first sail. 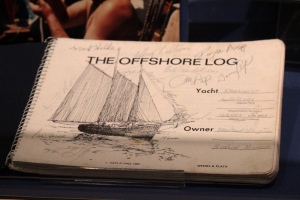 The Hjemkomst is now housed inside the center, while nearby is the Moorhead Stave Church — the dream of a South Dakota man who donated the church to the Hjemkomst Center and the City of Moorhead.

Guy Paulson built the church as a replica of the Hopperstad stave church in Vik, Norway, which was across the fjord from the farmstead where his father was born and his ancestors lived.

The Hopperstad stave church is believed to be the second oldest remaining stave church, built around 1140 at the end of the Viking age.

The church served the Vik community until 1877. It was eventually sold to the Society for the Preservation of Norwegian Ancient Monuments. There are now only 28 remaining stave churches.

For Paulson, construction began in January 1997. It took Paulson a year and a half to raise the structure, although the finishing touches would take another three years.

A walkway of stones curve up to the church since it was believed that evil spirits could only walk in a straight path. The curved stone pathway knocked the evil spirits off course.

It also has 25,000 rectangular shingles and a window for leprosy victims. According to the center, it uses the Urness Style of using complex patterns of intertwined dragons, plants and other animals. Since the Hopperstad stave church was used for centuries, Paulson also had to recreate patterns from three different periods.

The medieval wooden church did get few modern details — nails were used during construction and it has a reinforced concrete foundation covered with a stone veneer to match the appearance of a Vik, Norway, structure. It also is handicap access, electric lighting, a sprinkler system, thermometers and motion sensors. Here are some more pictures from the church: 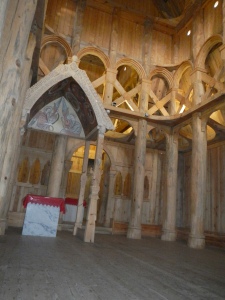 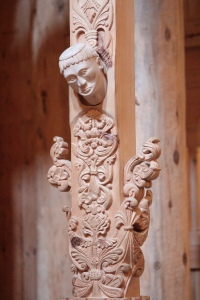