My grandmother, Gigi, and I share a love of birds. So, a hummingbird banding workshop was the perfecting outing for us to spend some time together. Luckily, the Saturday workshop was from 1-4 p.m. at the Potlatch Conservation Education Center in Casscoe, which gave me plenty of time to pick her up in Jonesboro and stop at Jack Ryan’s Convenience store to pick up some of their oh-so-good sandwiches for lunch.

I’ve been going to the workshop for three years now and I don’t think I’ll ever get bored with it. There were no little kids this time so Gigi and I were both able to release a Ruby-Throated Hummingbird after they were banded. It was a pretty neat experience since the hummingbirds sat for a moment before flying off. Later, we drove down to the dock to see how high the White River was.

It was a day well spent.

I’m not sure who was more surprised — this raccoon or I. We came across each other as I hiked to Cook’s Lake from the Potlatch Conservation Education Center in Casscoe. My first thought was “Is he alive? … IS HE STAPLED TO THE TREE?” The last thought is in response to how I first saw him (hint, it’s not the above picture but the below one).

For some reason, I never thought about raccoons climbing. Honestly, I never really gave them much thought period. Still, I liked my little bandit. I visited the center to attend its last hummingbird program of the year. I was determined to get a few better pictures of the Ruby-Throated Hummingbird. I think I met my goal. 🙂 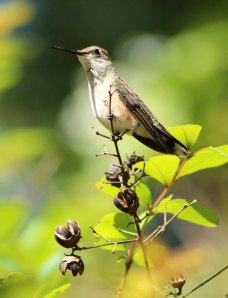 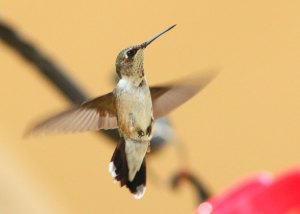 In addition to the hummingbirds, I even got a few more surprises: An immature male Indigo Bunting (first picture below) and a Red Spotted Purple butterfly. 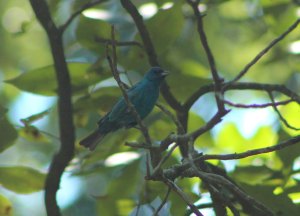 I hope you don’t have the Ruby-Throated Hummingbird in mind when describing how you don’t eat much or “eat like a bird” as the saying goes.

The hummingbird species visits as many as 2,000 flowers per day and consumes about 150-160 pounds of protein per day. I don’t know about you but I don’t think I could eat every 15 minutes like this species does.

I’m absolutely fascinated with this bird, which weighs about two to six grams. It’s the only breeding hummingbird in the eastern North America and its connection with Arkansas County is traced back at least 50 years when area residents began actively setting out feeders.

I was first introduced to the Ruby-Throated Hummingbird last year when I attended a program at Potlatch Conservation Education Center at Cook’s Lake in Casscoe. On Saturday, I went back to Cook’s Lake to visit Arkansas’ only licensed hummingbird bander, the center’s director Tanya Beasley. She’s one of about 150 banders with permits in the United States. She highlights her program through monthly workshops on the hummingbirds and the banding process each summer.

There are 300 species of hummingbirds whose habitats are solely in the Americas, although only 15 to 16 of these species are in the United States. Arkansas County only has the Ruby-Throated Hummingbird.

This species visits Arkansas County in the summer months as they head towards Central America via the Gulf of Mexico. Interesting side note: The albino hummingbirds struggle to make the flight across the Gulf of Mexico since the condition weakens their body and these birds rarely live a long life. Most birds only live three to five years.

Presently, Beasley said the hummingbirds in Arkansas County are nesting. Hummingbirds normally lay two pea-sized eggs about two to three days apart, which the female will incubate for about 12-16 days. After hatching, the fledglings are out of the nest by the third week and the female will have a second nest ready for two additional eggs.

“Seventy-five percent of the fledglings don’t make it,” she said. “They are very vulnerable to predators.” 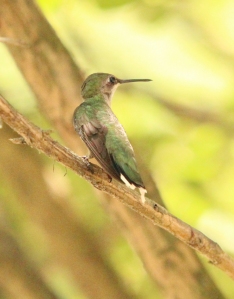 By next month, Beasley said Cook’s Lake visitors will be able to see more than double the hummingbirds viewed this past weekend as more hummingbirds pass through as well as with the fledglings out of the nest.

The birds really are remarkable. They have about 950 feathers and, according to Beasley, one of the largest brains of any animal in relation to its body size. It has an excellent memory as well and will remember where it has found food, such as hummingbird feeders, in past years so it can visit them during future migrations.

It’s a fact that Beasley and others attending this past weekend’s program kept reminding me of as I complained (okay, whined) that only bees were visiting my newly established hummingbird feeder. In case my luck continues to lag, Beasley also offered this tip: Incorporate red throughout my yard.

The color red attracts hummingbirds along with various plants, including the pineapple sage. I didn’t realize it, but hummingbirds have excellent sight but cannot smell so I was warned not to purchase a plant for the smell alone.

I’m still considering whether to leave my new feeder out year-round. Beasley recommends it, saying the feeder can be hung just above a candle warmer or placed two and a half to three feet away from a spotlight to keep the liquid warm. I’ll probably end up trying the spot light trick.

I’ve been to the Potlatch Education Center at Cook’s Lake before to seeing the hummingbirds (see here and here), however, I never went further then its educational center. I recently tagged along with a co-worker who was looking for places to use in a photo shoot. We ended up in Casscoe, which is home to Cook’s Lake. We decided to stop in at the center and ended up passing it to see the boat launch. It was amazing to see the bottomland hardwood trees and scope out more of the land at Cook’s Lake. If its this amazing in the fall, I can’t wait to see it in the spring! END_OF_DOCUMENT_TOKEN_TO_BE_REPLACED

It’s one of those days.

The only thing that saved my morning are two small little things:

1 I stumbled across what I should have said to the nosy woman that basically asked me if I, as a single woman, was lonely and jealous of my married friends and if I even had friends. (I think she meant well—we have always gotten along well. It was just inappropriate for the nonprofit seminar setting that we were in.)

While I answered nicely enough, I should have added this phrase to the mix.

Single as a dollar and I’m not looking for change.

END_OF_DOCUMENT_TOKEN_TO_BE_REPLACED

Slight, gorgeous and swift, they just bring a smile to your face. They have also gotten me interested in taking more pictures of birds in the wild. On Saturday, I visited Potlatch Conservation Education Center at Cook’s Lake in Casscoe for a hummingbird banding program. The center’s front yard was literally filled with the little birds flying from feeder to feeder and flower to flower. Here are some of the pictures I took: 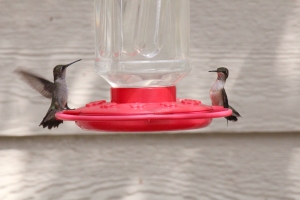 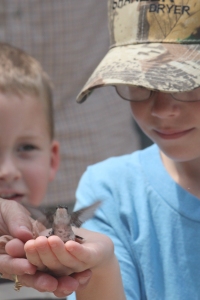