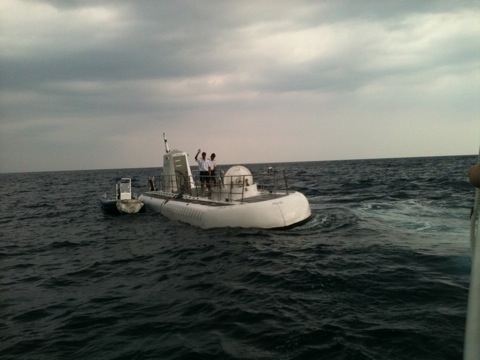 100 feet deep. I did my first – and probably last – trip in the submarine Atlantis Wednesday. We mostly stayed around 40-70 feet deep looking at various fish and coral before going to 100 feet.

Personally, it was my least favorite activity. It was $105 and I don’t think it was any where near being worthy of that cost. Maybe half. It was just too crowded and the fish we saw we’ve seen scuba diving.

The water was choppy, and at times, I thought we would capsize in the boat that took us to and from the submarine. I was glad to get back on dry land. 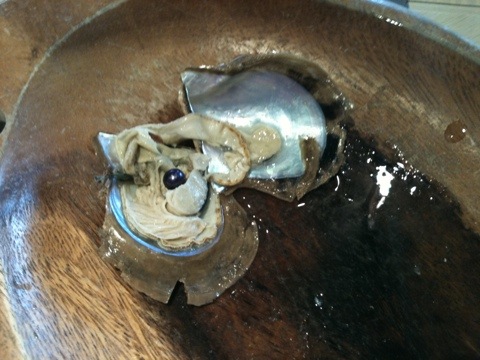 Afterwards, Aunt Lynda and I picked an oyster for a jewelry store employee to open and check for pearls. I got a decent sized black pearl while she got twin black pearls. 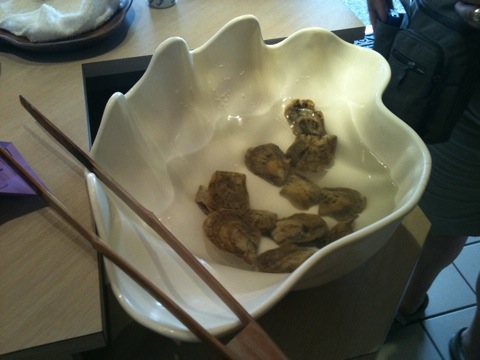 I ended up turning my pearl into a necklace while Aunt Lynda decided on earrings. The pearls were mounted and we were given instructions not to wear them for 24 hours – a hard thing to accomplish. I love my necklace. 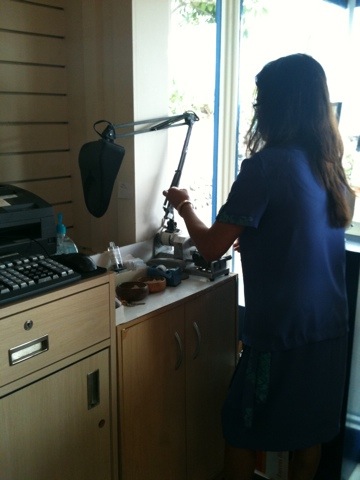 Finally, we had to end our shopping to head home. Aunt Jo’s conference for International Interpreters Association kicked off yesterday with a luau that night and we all got to attend. More on that later.

Sound exciting? It was. Sunday was our day to travel down the coast to view the volcano with stops along the way. 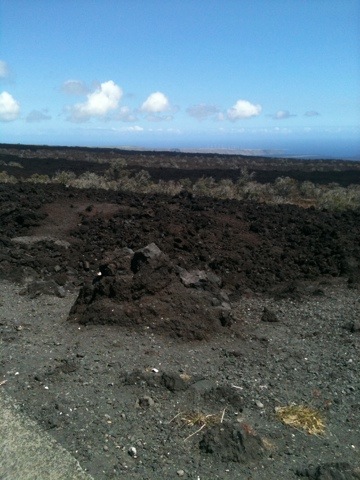 Our first stop was Kealakekua Bay State Historical Park, home of a monument to Capt. James Cook. It has sparkling aquamarine water and, when we were there, a novel wooden boat just floating in the water. There were also tons of crabs and dolphins as well. A man sat at the entrance carving wooden statues. We hope to go back later to kayak and snorkel.

St. benedict’s Catholic Church, also known as the Painted Church, was our next stop. A cat sat on the altar up front basking in all the attention he received while church members offered crafts to keep the churn in repair. I loved the various scenes painted on the wall, such as the symbolic picture of a good death with rays of hope shining, the appearance of the Cross to St. Francis, and the Temptation of Jesus. Above, a beach theme was painted with the beaches and palm trees on the side and the open sky at the top.

We finally saw a sea turtle at our next stop, Pu’ uhonua o Honaunau National Historical Park. The green sea turtle, Honu, swam just before the beach poking it’s head above the water every once in a while. Surrounding it, were the statues and explanations of early life on the Hawaiian island. Aunt Jo especially loved the wooden canoes on display. They were pretty cool.

We then followed the winding Hwy. 19 further down the coast past an early 1900 lava flow stopping to eat at the well-recommended Hana Hou Restaurant and Deli. I got the super delicious Overloaded grilled cheese sandwich. 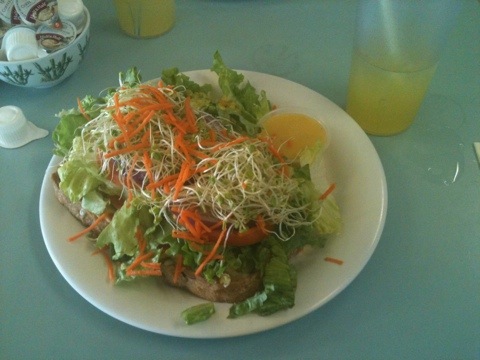 I still had to cross the road for a strawberry filled Malasada at the below well-known bakery, which had terrible service but great malasadas.

After that huge and amazing lunch, we kept on driving with one last stop at Punalu’u Black Sand Beach. There were two sea turtles sleeping on the beach. 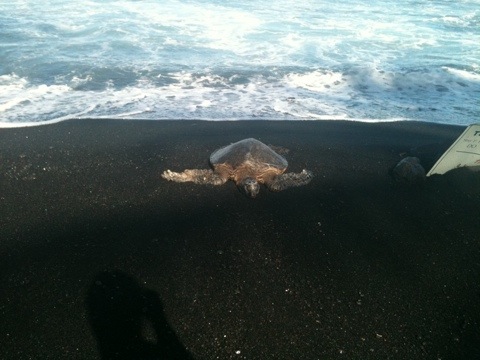 It was our last stop before finally making it to the widely anticipated Hawaii Volcanoes National Park. We had to see the lava tubes and that was one of our first stops within the park. We stopped at the Thurston Lava Tube, which walked us through the rain forest.

Our drive through the park to the observatory took us past several steam pockets. The park’s staff was not friendly at all, but the views were breath taking.

We stayed at the Thomas A. Jagger Museum until after dark to see more than just smoke rising from Kilauea. 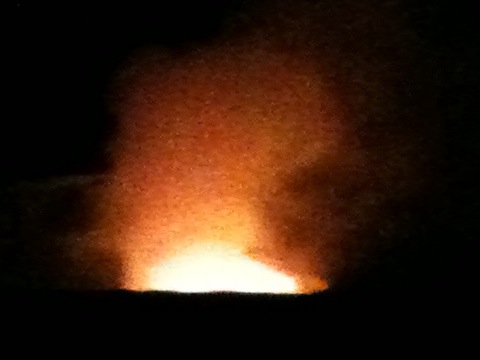 It was a great cap to the day. We continued the rest of our drive around the island after dark and got home around midnight. 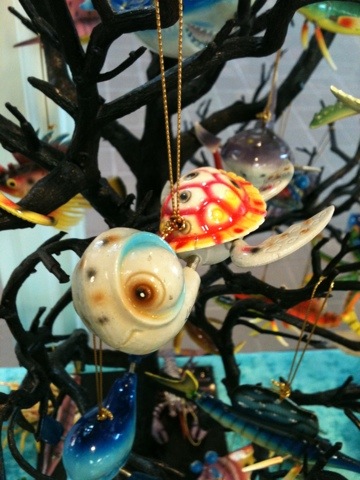 We’ve spent the past day and a half on the go. On Saturday afternoon we took in some shopping. I found the above little guy and immediately bought him for my best friend-isn’t he cute?

Afterwards, GiGi and I went to the Sheraton hotel for drinks and to watch the manta ray feeding. We also found a gorgeous walk to the beach where I stepped in the only dog poop we’ve found.

It was a gorgeous view from the hotel: boats in the harbor, a setting sun and the coastline stretching on for miles. Later we got to see about 10 manta rays feed.

While we watched the Maya rays, my aunts swam with them for two hours before picking us back up for dinner at the only place open: Dennys. 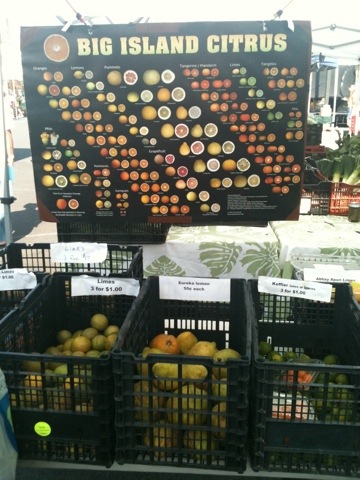 A walk along the beach jump started our first full day in Kona.

We had breakfast on the patio and actually saw a cardinal. It was neat seeing a bird that I can find in my backyard here. It’s a connection I didn’t really think of.

It’s now 9 a.m. And we are just leaving the local Saturday morning farmer’s market. Fresh bread, fruits and vegetables and even scented oils. We are in heaven.

Aunt Cindy bought me a small bottle of the oils – she was afraid I wouldn’t buy it for myself. She had a point. I couldn’t decide whether to buy it or not, and I absolutely loved the homemade oils. I put some on my wrists to smell and I am still in love with it 30 minutes later.

We spent a lot of time buying groceries. For me, my sweet tea is a necessity so I had to buy my supplies. 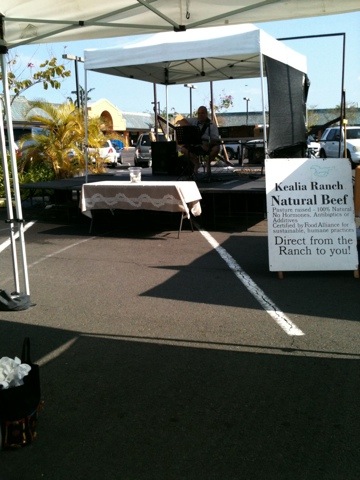 Despite trouble with a story, today was just plain amazing!

First, I will be able to keep my job after July 31. My reporter position is funded through a two-year grant that will expire this August. I’m happy to say I’ll remain as a SDL reporter after the grant ends.

I’m thankful that my bosses like my work enough to keep me, and for a community that has been very vocal to my bosses that they want me to stay. Yay!

What could make my day even better? Well, my flight to Kona, Hawaii, is officially booked! I even got the roundtrip fare at $200 cheaper than I expected.

I will now be spending a full week in this paradise where I’ll have a private stretch of beach behind our townhouse. See the above picture!!

Have you been to Hawaii? If so, any suggestions of what to do?

A Cup of Jo