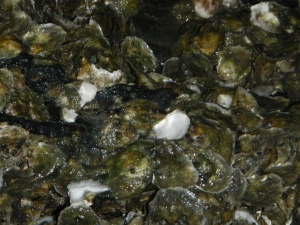 I’m finally back from vacation. I’m exhausted, but I had a great time. We basically took it semi-easy — slept in and then got going until we would arrive home just in time to pass out again.

One thing that kept us out late early in the week was a walk on the beach to find crabs. Yep, I said crabs. My brother-in-law decided he wanted to crab for part of the week and we spent one night walking the beach to see what we could find. Below’s our find, plus deer we saw on the way home. Enjoy! 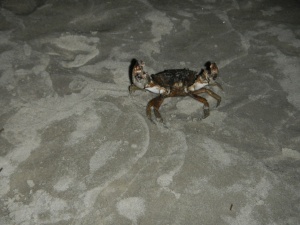 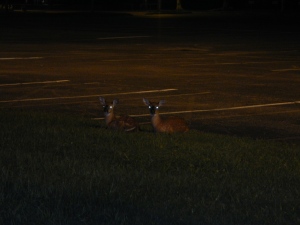 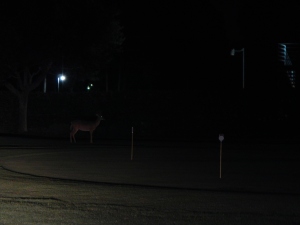 It has rained every day.

The rain comes typically in the afternoon giving us plenty of time to do all we want to. So far, we’ve mainly wanted to look around, reacquainting ourselves with the island. We last visited more than 10 years ago.

Jekyll Island was originally an exclusive winter retreat, The Jekyll Island Club, for U.S. elite. It was purchased in 1886 and hosted families such as the Rockefellers, Morgans and Pulitzers.

It became a Georgia state park in 1950 – unique to me since it is a “barrier island” off Georgia’s southeastern coast. It has tons of marshes, hotels and tourist-minded businesses.

We spent part of Saturday and some Sunday just looking around. The views are great, and Dad was fascinated with the huge ships carrying cars (Hoegh Autoliners). My only complaint? As the sole birder, I am unable to get pictures of some of the birds we pass in the marshes bordering the road. One such bird – a Roseate Spoonbill. 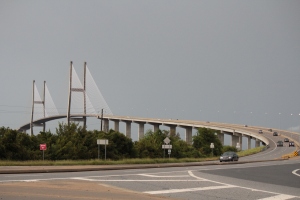 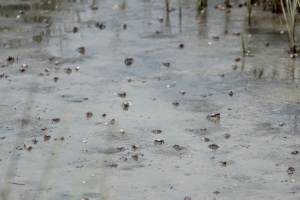 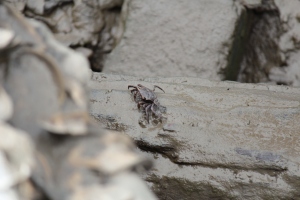 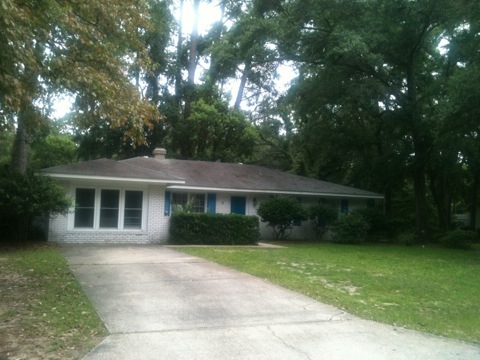 We’ve finally arrived at our Jekyll Island rental. After 15 hours in a car (we stopped and napped along the way), my first priority was a shower.

We’re now about to unpack and head out to reacquaint ourselves with the place until it’s time to pick my sister and her husband up at the Jacksonville airport.

Here’s some pictures so far: 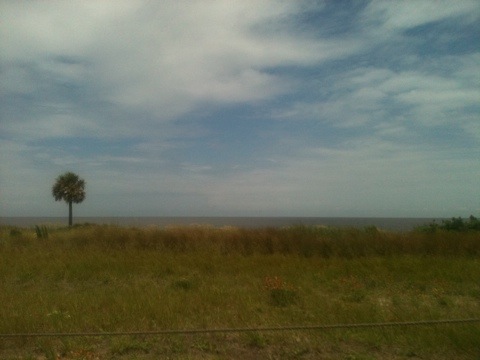 I’m on the road, just five hours late. My sister, her husband and I loaded up my car with our gear, two boogie boards and tons of food and drinks.

Next? The task of fitting my carload into my parents already half-full impala.

It was a close fit but we did it. We’ve also managed to kill most of the mosquitoes that were in the car.

Now, we’re finally on our way to Jekyll Island. Only 11 hours and 13 minutes to go.

My grandmother, Gigi, and I share a love of birds. So, a hummingbird banding workshop was the perfecting outing for us to spend some time together. Luckily, the Saturday workshop was from 1-4 p.m. at the Potlatch Conservation Education Center in Casscoe, which gave me plenty of time to pick her up in Jonesboro and stop at Jack Ryan’s Convenience store to pick up some of their oh-so-good sandwiches for lunch.

I’ve been going to the workshop for three years now and I don’t think I’ll ever get bored with it. There were no little kids this time so Gigi and I were both able to release a Ruby-Throated Hummingbird after they were banded. It was a pretty neat experience since the hummingbirds sat for a moment before flying off. Later, we drove down to the dock to see how high the White River was.

It was a day well spent.

To say my aunt is a gardener is putting it lightly. Her yard is her pride and joy as well as a year-round showcase. I love visiting her to discover what’s new in her garden (and plus because she’s simply amazing). It kills me that the gardening gene went to my sister and not me. I have a black thumb.

Anyway, here’s what was blooming at my last visit: 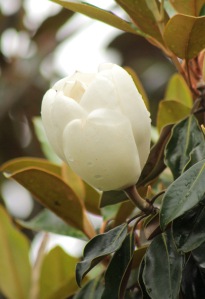 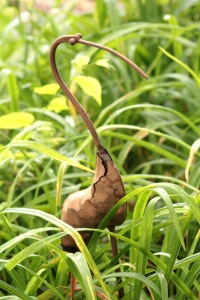 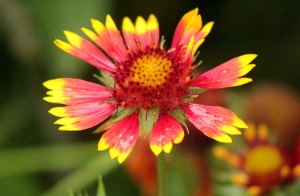 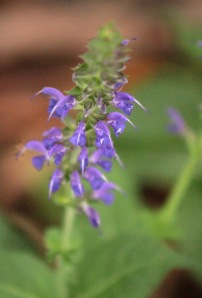 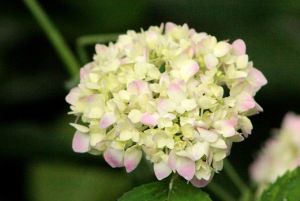 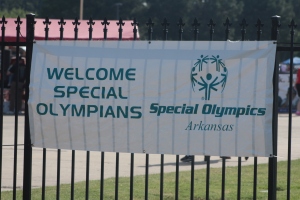 I attended my first Special Olympics Saturday. The Arkansas event was held at Harding University’s Athletic Center and my 13-year-old cousin competed in three swimming categories. Not bad for a girl who just decided to swim six months ago!

Brittany ended up with one gold, two silver and a bunch of very proud family members. It was a great way to spend the day; not only because of my cousin but also for the other inspiring swimmers.

One girl was paralyzed from the waist down. Her coach would lower her into the water with a float device helping keep her lower limbs afloat. She raced solely on her arm strength and still managed to receive first place.

You could also tell another little girl didn’t care about the medals — she just enjoyed swimming and being around others. She slowly “doggy paddled’ her way across while smiling broadly at the audience.

It was truly awe-inspiring and I’m proud to say I was an attendee.

My family has a habit of “rescuing” kittens … although in hindsight they might not have needed saving. My sister rescued a kitten she found running down a sidewalk after two boys. I rescued a kitten playing in the street while HUGE dogs ran its way. My mom broke the tradition by rescuing a one-eyed cat that was really annoying (it has since disappeared) and later rescuing the meanest kitten I have ever met (we gave him away). Our cat collection literally began in that order.

All of these cats now live at my parents’ house in the country along with my parents’ older yorkie and occasional visits of the pets my sister and I have. Needless to say, we were out of room for pets. Well, my dad put his foot down — no more.

So, this past weekend was a shocker. It started off typical with my dad needing to run by the local Knights of Columbus Hall to check on things. Well, apparently it was more to check on the two kittens he found abandoned at the back door.

Why was this shocking? My dad knew by bringing my mom to the KC Hall that those kittens were going home with them. He later kind of admitted to it. However, it’s a decision I don’t think anyone has regretted. I’ve never seen a cat so sweet or playful as these two.

From the beginning, the two ran up to us to play or give us kisses. We’re already in love with them. So, welcome to the family Gray and Marble. 🙂

During some warm weather this week, I talked my grandmother outside to see what was blooming in her yard (and, of course, find some birds). Here’s what we found: 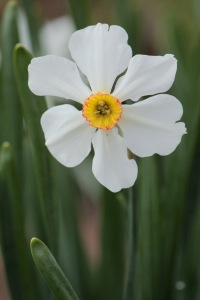 Canadian Geese and Mallards were the main birds we saw Sunday and this morning. They basically had the run of our hotel and restaurant parking lots (which surrounded a small pond).

Most of our time was spent with family. My great-aunt lived a full life, and I was surprised to learn that she moved to France with her husband and small son in the late 1940s.

Her husband was stationed near a small village, and her son said the French did not like Americans even at the end of WW2. When his father worked nights, people would come bang on their windows throughout the night to scare them.

My great-aunt would also keep a pistol under her pillow just in case. Still, they weren’t too afraid. Her son said he could remember fetching fresh bread for his mother.

This is the same lady who happened to be in town when I was born. She was my “grandmother” so she could visit my mother and hold me.

We ended up having three hours of free time after the visitation so we visited Fort Harrison State Park.

It was a nice break and the park was fantastic. I could definitely see me using it as often as possible if I lived here.

It also had family history since my great aunt and her family were stationed at Fort Harrison before it became a state park.

On Sunday, the birds and a super fat squirrel greeted us at the cemetery. It was funny to see the geese surround us. I mean literally surround our car while we were leaving. There were even three geese on the roofs watching us.

We’re now heading back to Arkansas. Just counting the hours until I can pick up my dog and be home out of the rain.